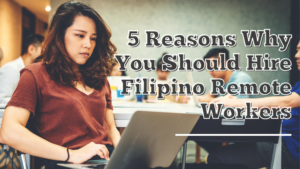 What really separates remote workers in the Philippines from others? Keep reading and we’ll show you five reasons why you should hire Filipino remote workers to help your business to grow.

There are an estimated 10 million Overseas Filipino Workers in the world. This just proves that Filipino workers would do whatever it takes for their families. They conquer distance, homesickness, and stress to earn more. However, instead of working abroad, some Filipinos opted to do freelance work and engage in the gig economy remotely. According to a 2019 report on the ‘Global Gig Economy Index’ by Payoneer, the Philippines placed sixth in the world as the fastest-growing market for the gig industry. This revealed a 35 percent growth in freelance earnings.

In a TED Talk by Angela Lee Duckworth, an American psychologist, a predictor of success is not about IQ, good looks, or social status, it’s about “grit”. Grit is passion, perseverance, hard work, and a drive to improve.

Filipinos are naturally hard-working and gritty and one of the most preferred workers abroad. Filipino online workers not just work but most importantly, they serve clients with passion and perseverance. Attitude is what separates between good workers and the best ones. This is the first reason why Filipino remote workers stand-out.

Secondly, Filipinos are proficient in English. It is an official language of the Philippines along with Filipino, a standardized version of Tagalog. Filipinos are taught English as soon as they start speaking and 70% of the country’s population, making the Philippines one of the largest English-speaking countries in the world.

If you are looking for people who can comprehend, speak, and write English fluently, then look no further! Filipinos are your go-to remote workers.

3. Resourcefulness and willingness to learn

Filipinos are naturally creative and value education so much. If you want to get tasks done, a Filipino would do anything in their capacity to do things creatively. They are highly-trainable and they would not take criticisms lightly that they would want to keep on improving. This is probably one of the reasons why Filipino freelancers were among the top 10 fastest-growing earnings as of 2019.

One of the key traits of Filipinos is being hospitable and nurturing which makes them ideal for Customer Service and Health Care jobs. There is no limit on what Filipino workers can do though but if you want to hire people with comforting touch for you and your customers to indulge in, then look no further.

Finally, Filipinos are adaptable and flexible. Geographically speaking, the Philippines is located on the Pacific Ring of Fire. This is where major natural catastrophes occur such as earthquakes and volcanic eruptions. The country also experiences an average of 20 typhoons annually which makes Filipinos very resilient. In that case, you can put Filipino workers almost anywhere and they will surely thrive. Chasing task deadlines would surely look like a piece of cake to them.

Those are the five key traits of Filipino online workers that separate them from the others. These traits armed with competence and skills would surely help your business grow.  In conclusion, you can definitely trust a remote Filipino worker to do tasks with quality and efficiency.  If you want to hire remote Filipino workers, contact us and we’ll show you a cost-effective and efficient way how.